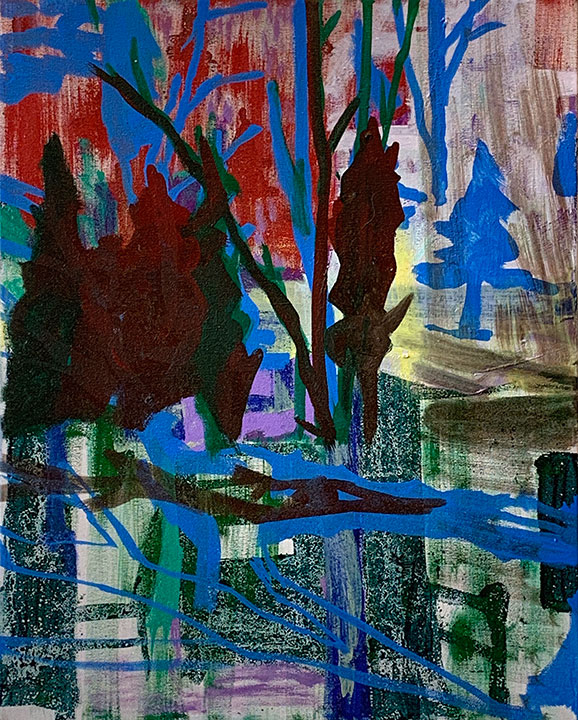 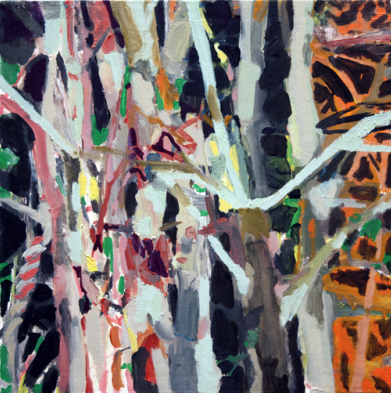 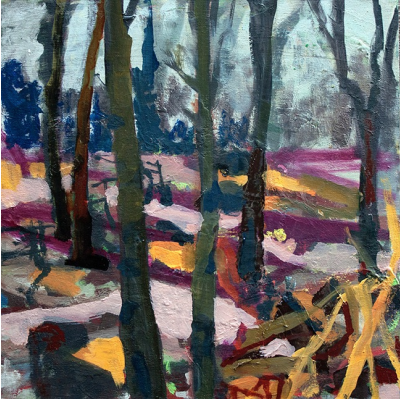 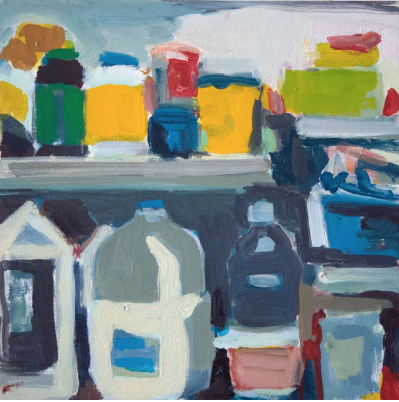 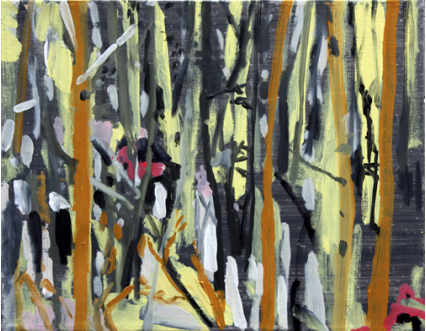 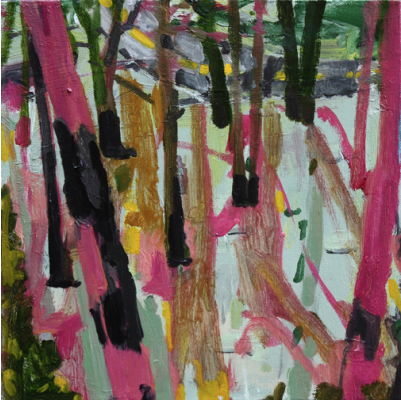 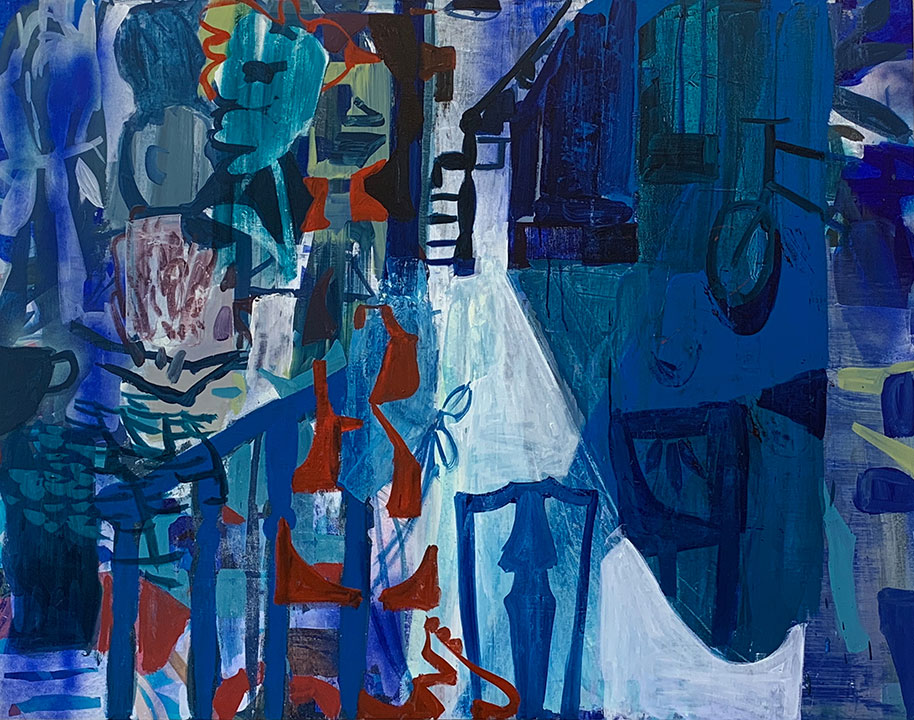 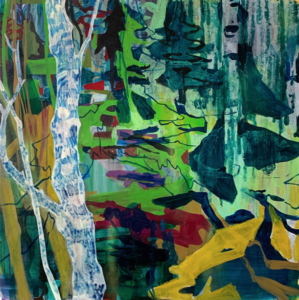 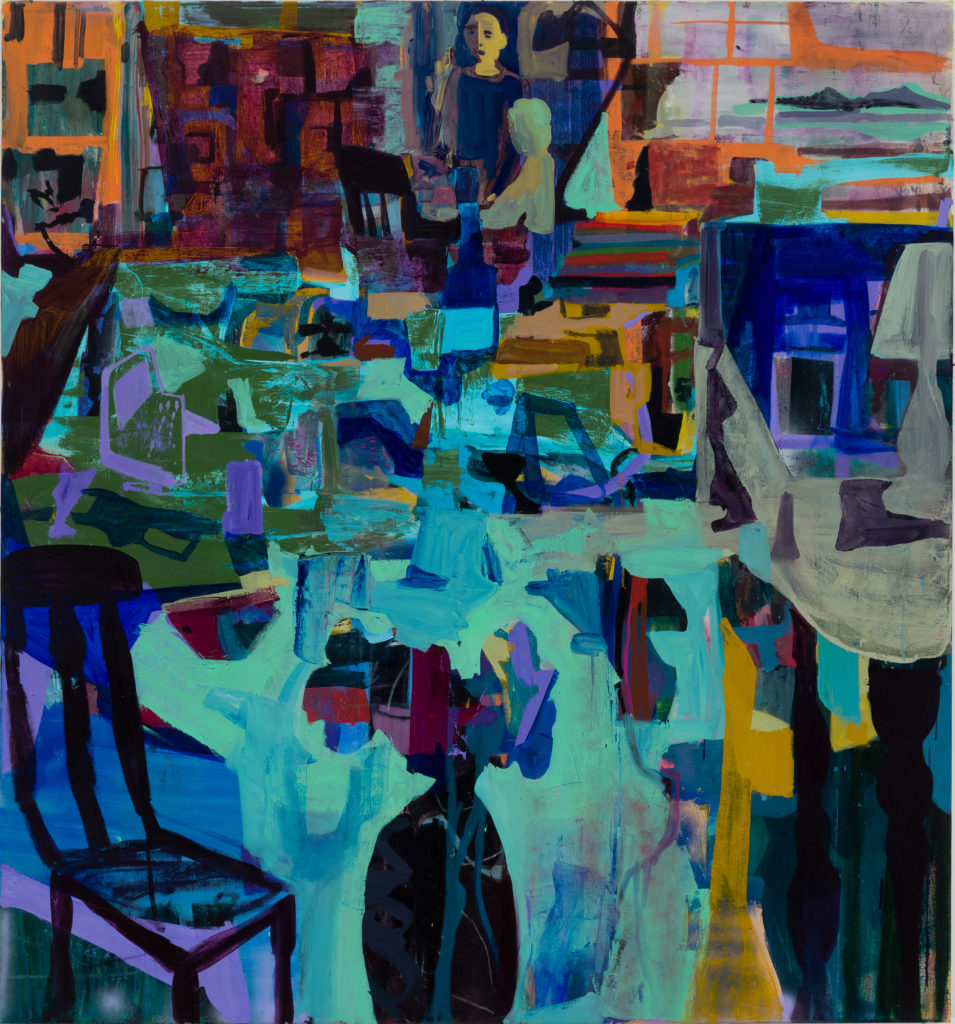 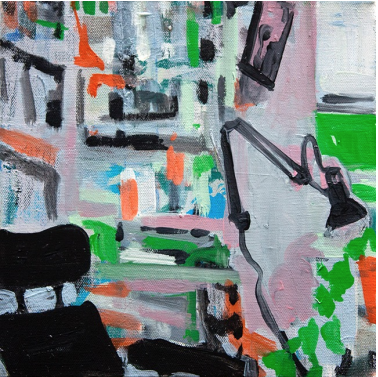 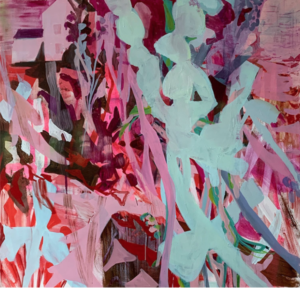 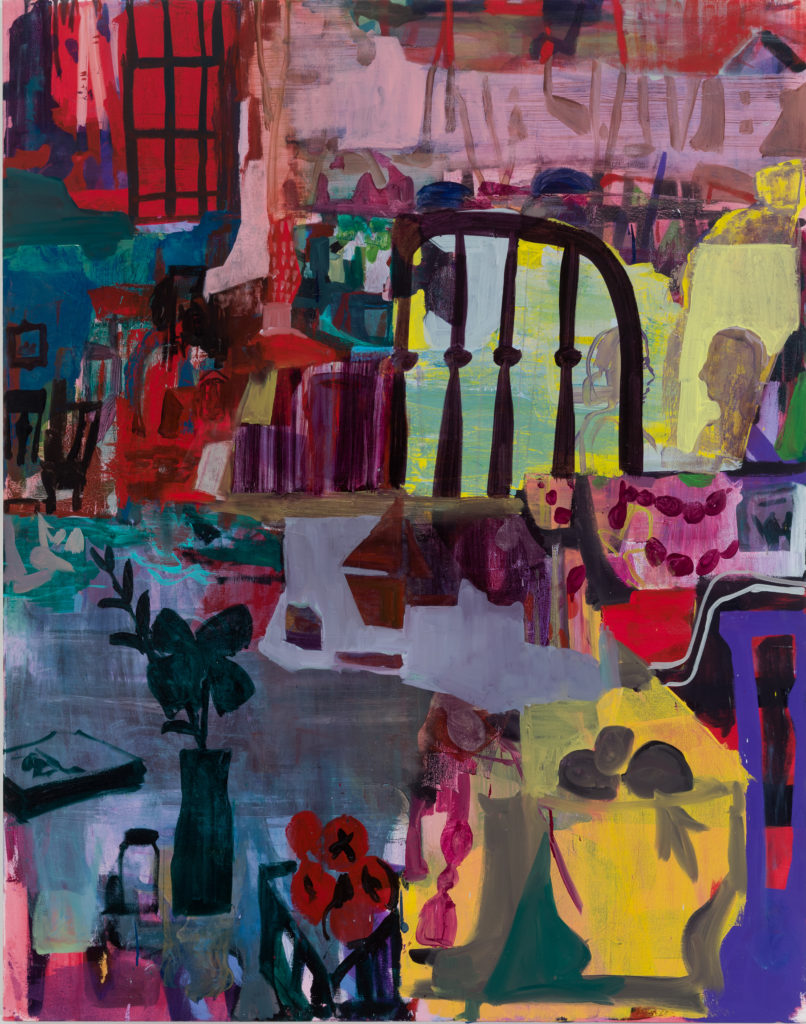 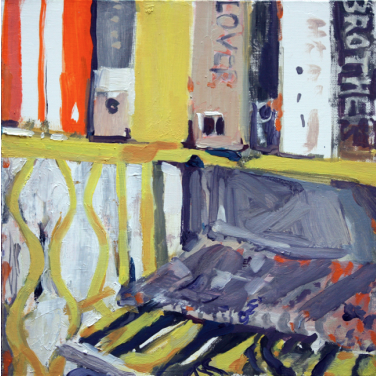 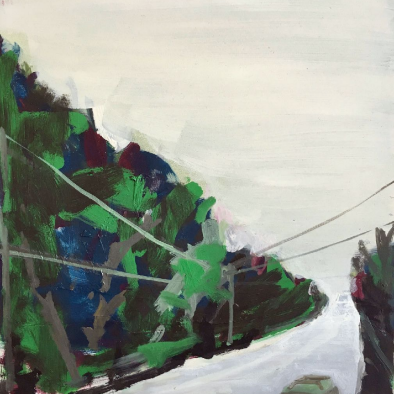 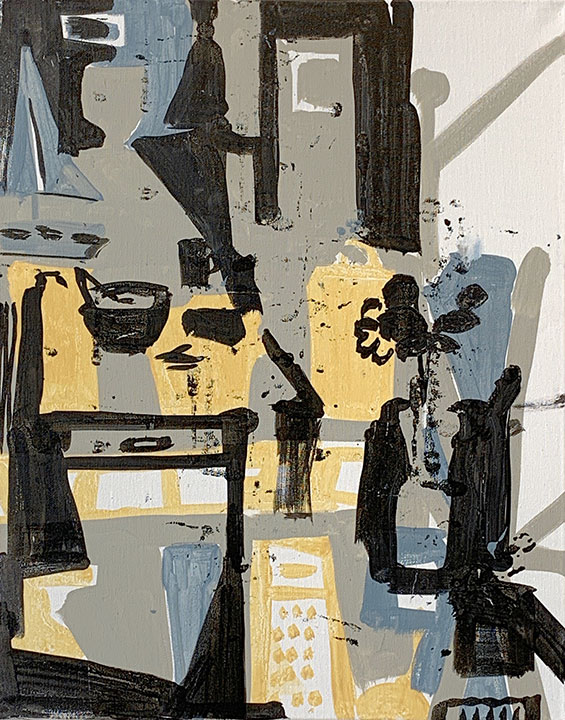 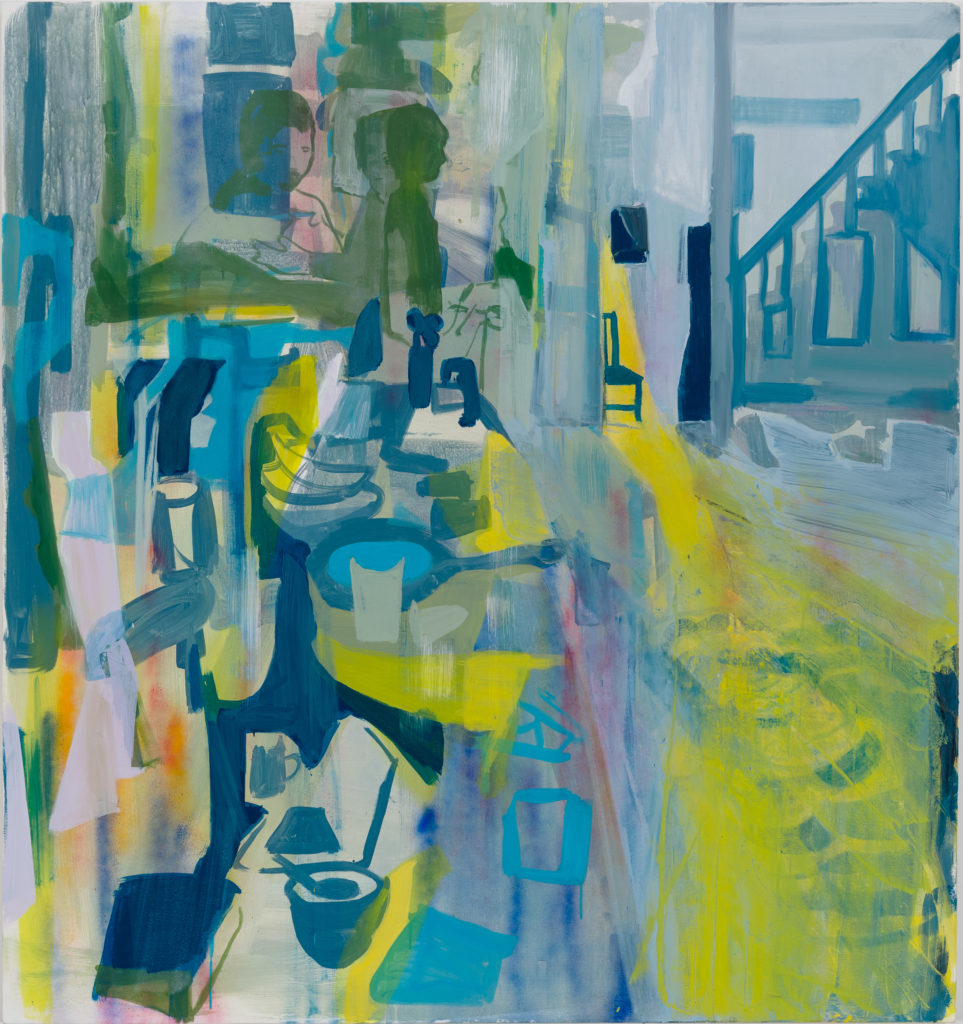 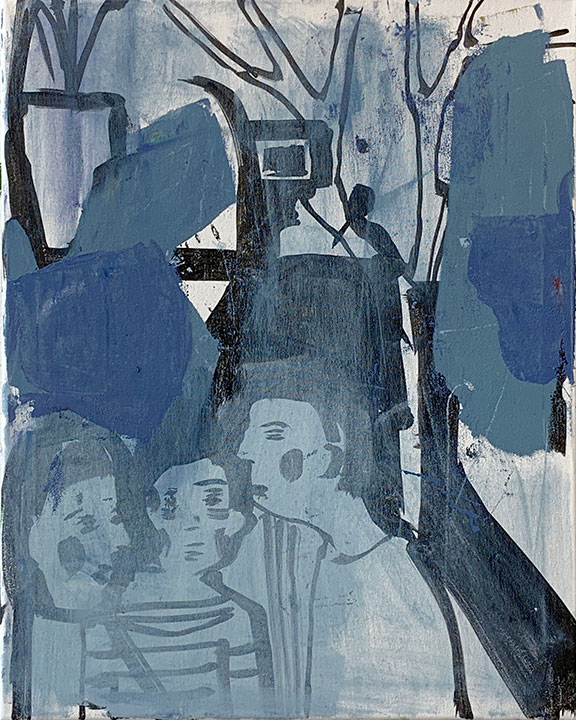 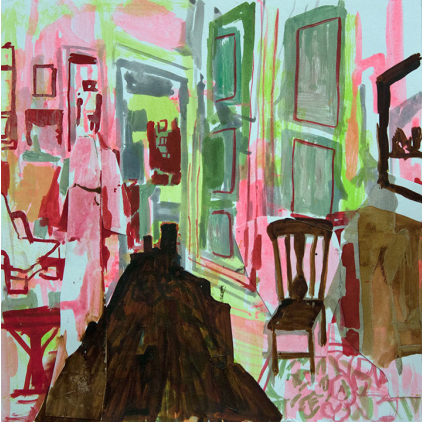 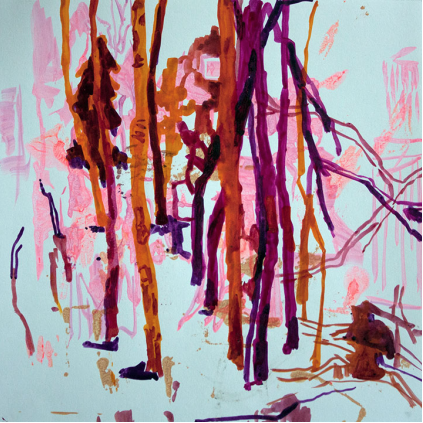 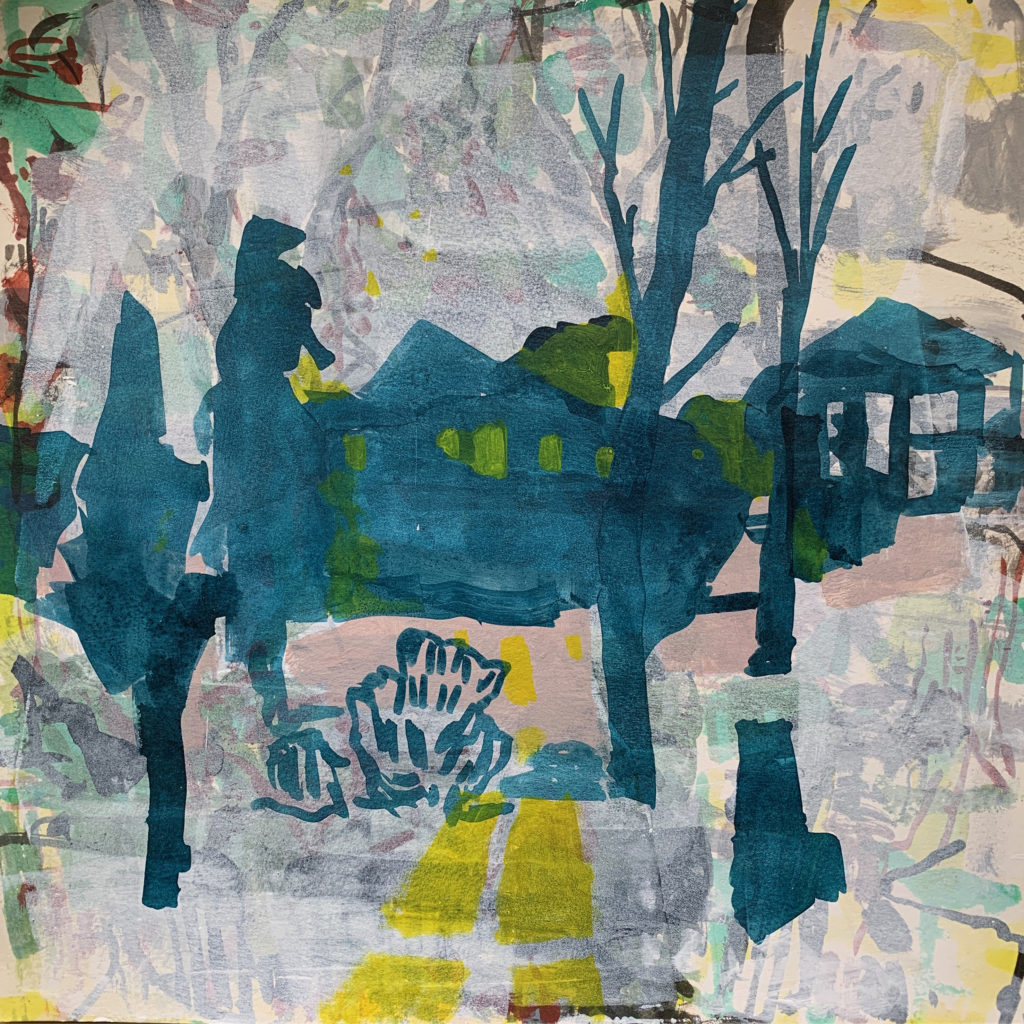 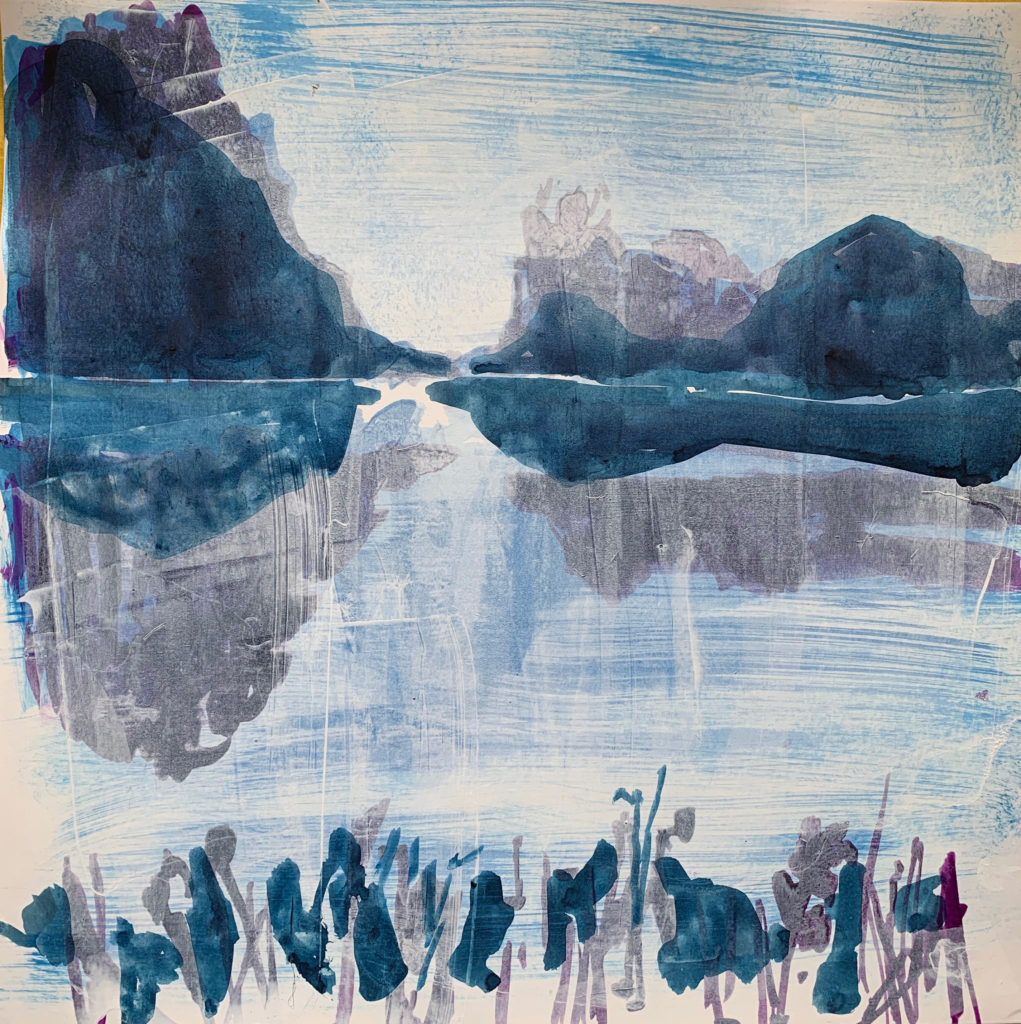 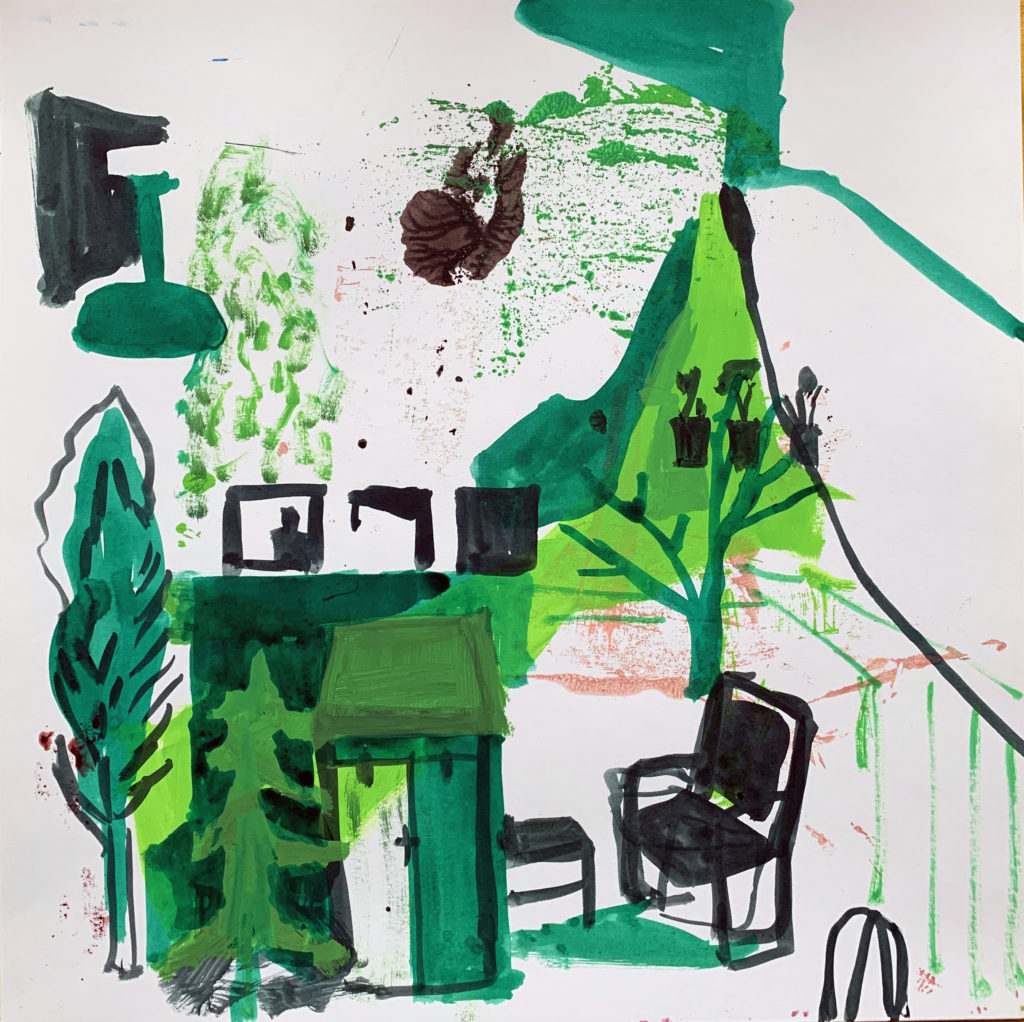 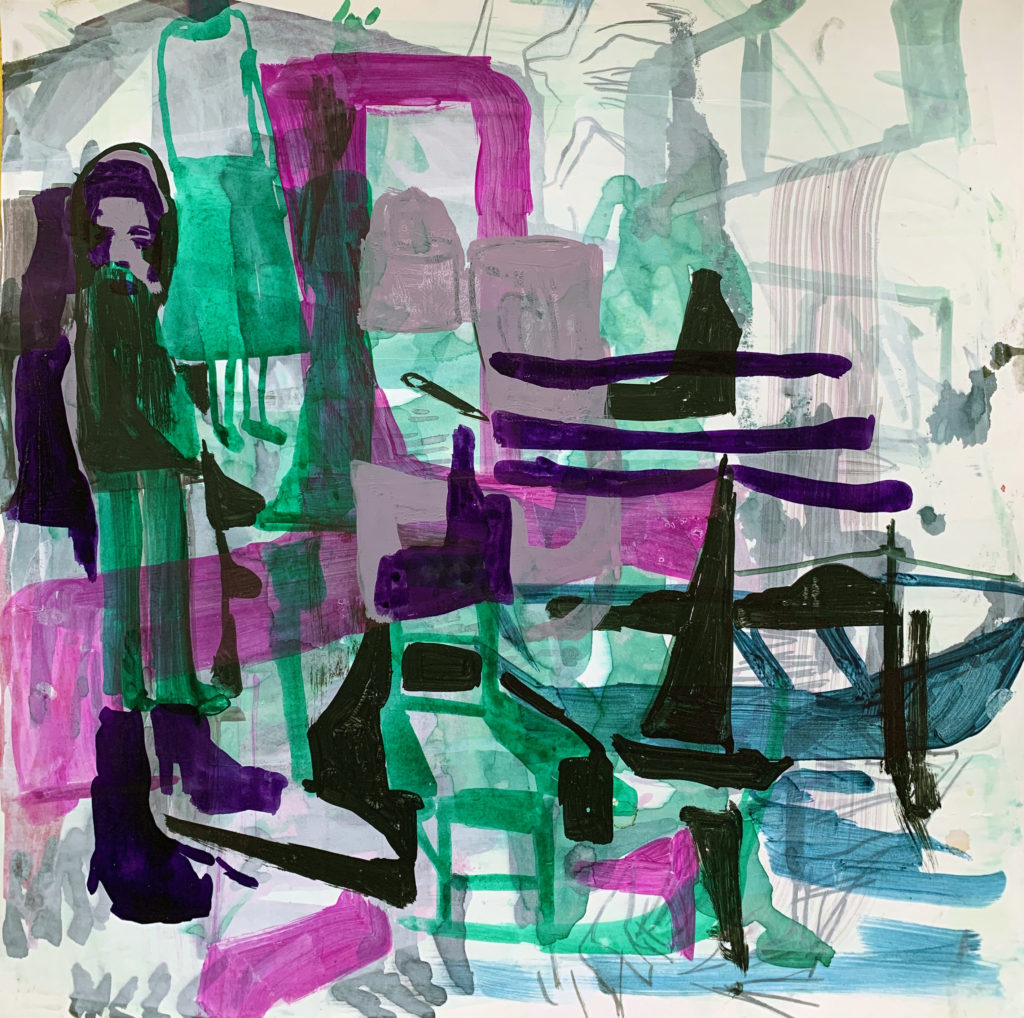 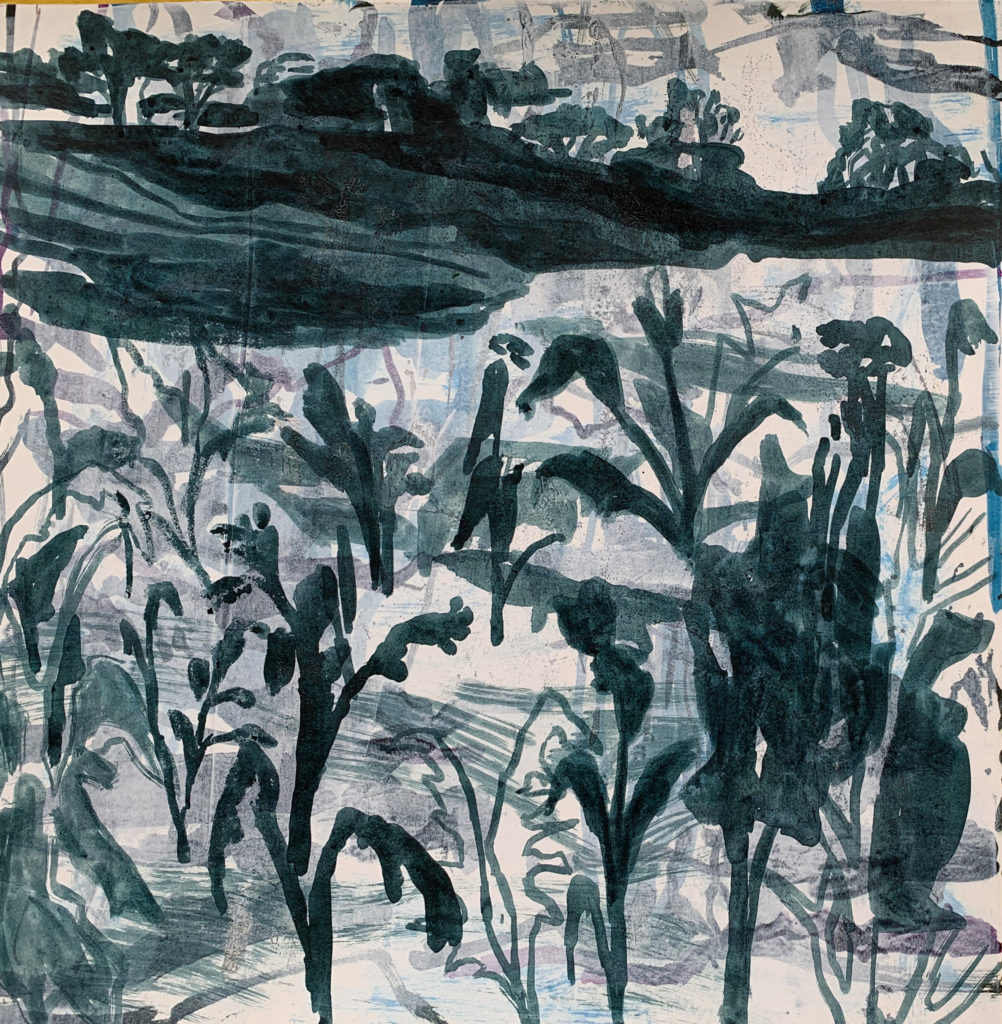 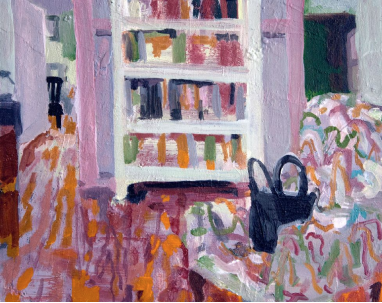 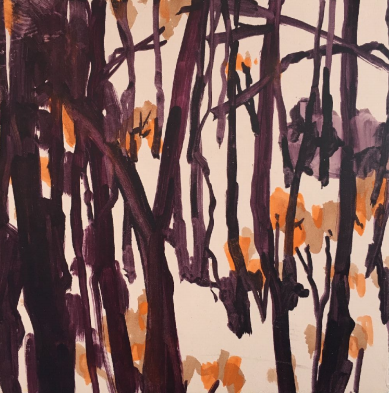 Behind Allison Gildersleeve’s canvases, collages, and drawings lies a singular proposition: places are not inert. They are repositories for all that passes through them. Gildersleeve returns again and again to familiar settings – wooded areas, home interiors, open highways, back country roads – to show that repeated visits to the same place invariably result in wildly divergent depictions.

Gildersleeve describes her process as such: I assemble and disassemble my images so that unlikely situations collide in the same plane. My studio practice mimics the way I process events around me. Logical space and linear time get tangled through my conflicting impulses to stay or escape either by racing forward or turning back.  A bicycle leaning against a wood shed, a table littered with the remnants of breakfast, a darkened living room, an unmade bed, these tiny moments of insignificance take on the gravity of remembrance, as if they held the possibilities of a thousand different outcomes instead of the actual unfolding of events. .

Each studio day, I add ink drawings to my sketchbooks, distilling everyday objects and the landscape around me into line and silhouette. I use that growing library of personal iconography in the paintings as if they were props in a stage set, moving them around and rearranging their order until they bump up against each other in such a way that their origin becomes transformed. A vase, a doorframe, a clump of rocks and weeds, a parked car: each serves as a marker to me for a certain place, but those markers lose their stability when I shuffle them randomly into the deck. I don’t know how else to confront the messiness of living except by packing it with abandon into a single frame.

Find us on social media: